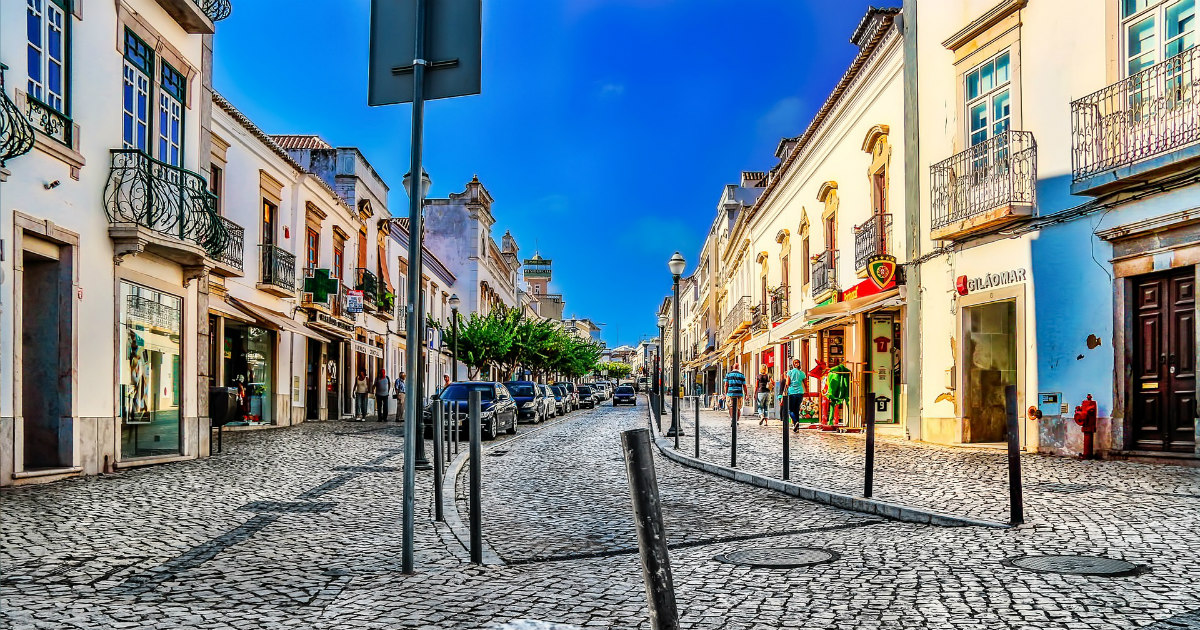 Now, where is Tavira Portugal? Not knowing a lot about Portugal I was not sure. It actually is located on the Algarve coast. It is a small city along the Gilão River that extends through the Ria Formosa Natural Park. 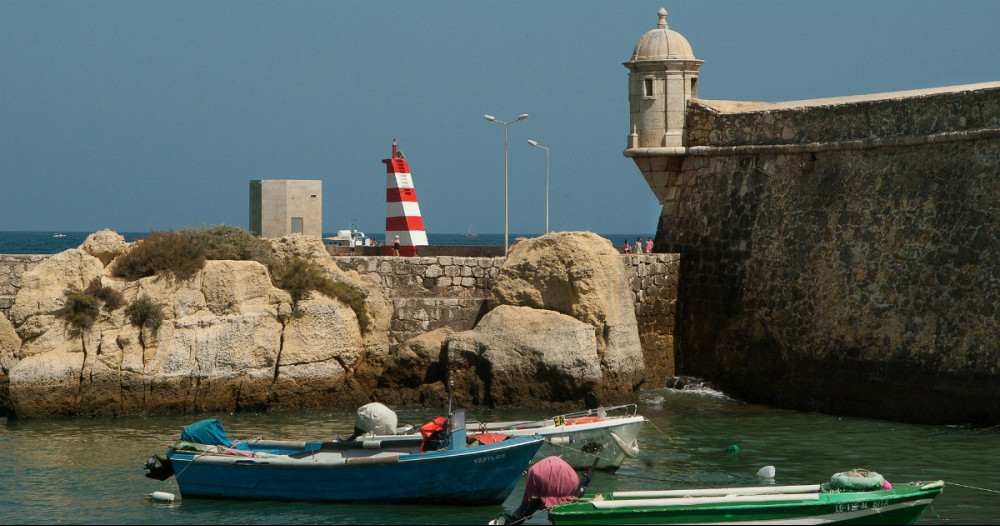 Among the many small towns along the gorgeous Algarve coast, Tavira is an exception for its uniqueness and beauty, Located inland from a long sandy beach, the salt pans are populated with many types of seabirds such as flamingos, spoonbills, and waders. In the middle of the town, there is a thirteenth (13th) century castle located on the grounds of a mosque and Santa Maria do Castelo Church. Within the church are the tombs of seven (7) knights said to have been ambushed by the Moors.

Where Is Tavira Portugal — Some History of the Area

Tavira was one of the first Phoenician settlements on the Iberian Peninsula in the eighth (8th) century BC which was during the Bronze Age. The settlement stayed in place until the end of the sixth (6th) century BC during which time it was destroyed.

It took a century for the settlement to recover and during the Tartessian Period, it flourished. It once again was abandoned, and this time during the four (4th) century BC. Its main center moved to a fortified hill nearby called Cerro do Cavaco.

Two (2) mosques, palaces, and Tavira Castle were built by the Moors. During this time Tavira became a recognized and significant port for fishermen and sailors. Rapid growth began in the eleventh (11th) century becoming an important town of the Algarve.

In 1755 there was an 8.5 to 9.0 earthquake that destroyed the buildings of this important port town. It became known as the Lisbon earthquake. The town was rebuilt in the eighteenth (18th) century and has thirty-seven (37) churches. A bridge across the Gilao River links the two (2) parts of the town.

Things to do in Tavira, Portugal

* Praça da República — this is where the tourist office is located within a beautiful arcade with the town hall on one side and on the other a good number of cafes, restaurants, and bars.

* Palácio da Galeria — this Baroque palace, now the municipal museum, goes back two thousand six hundred (2600) years to Phoenician times. In the basement are artifacts as well as ritualistic wells dedicated to Baal (god of storms). Also, within the museum, you will find more contemporary art and photos, movies, and costumes that reveal the folk and fishing traditions of this area.

* Cabanas de Tavira — a short distance from Tavira, this town is located right on the front of the Ria Formosa lagoon. Multi-colored boats and yachts are scattered about the waters with the dunes of another barrier island within view and which you can reach by water taxi. On Avenida Ria Formosa you will find restaurants and can take in views by strolling the boardwalk.

* Ponte Antiga Sobre o Rio Gilão — spanning the Gilão River this bridge was built in the twelfth (12th) century and renovated in the sixteenth (16th) century. Known by many as the “Roman Bridge” it is pedestrian-only with great views of the Praça da República and riverside mansions. There are benches scattered along its expanse where you can relax and get a good view of the city.

* Praia do Barril — this is a world-class beach located on the Ilha de Tavira barrier island. Filled with loungers and parasols along its white sands, it is surrounded by dunes. A miniature train is available that takes you from the parking lot over the dunes and creeks to the remains of an old tuna fishing community. The homes have turned into a museum and restaurant.

* Igreja da Misericórdia — this church with its Renaissance facade was built in the mid-sixteenth (16th) century. It is filled with many relics and high-quality stonework.

* Jardim do Coreto — this park is connected to the Praca de Republica at the riverfront. It is a great place to relax and take in the beauty of flowerbeds, hardwood trees, and palms. There are walkways throughout the park that are decorated with mosaic patterns. You will find many of the locals socializing here and playing dominoes. Built in the 1890s, it is the oldest park in the town. The octagonal wrought-iron bandstand gives the park its name (Coreto).

* Ria Formosa — this is a natural park with over one hundred and seventy (170) square kilometers (65.6 square miles) of water channels, islands, salt pans, beaches, and shellfish beds. This wetland site has over two hundred (200) species of birds both migratory and permanent residents. You can also watch salt farmers and fishermen conduct their daily work that has gone on for many generations.

* Tavira Castle — its walls date back to the Almoravid dynasty in the eleventh (11th) century. It was renovated somewhat in the twelfth (12th) century during the Almohad Califate. You can climb the Albarrana tower, a mark of the Moorish fortresses, for a good view of the area. Some parts of the castle were restored after the Reconquista. You can also spend time relaxing in the garden.

* Fado com História — here you can enjoy a live performance of Fado which is a Portuguese music genre. You can also learn about its history and have snacks and a glass of port wine with the artists after the performance. You can take a ferry across to it.

* The Cuisine — as either an appetizer or snack an estupeta de atum is highly recommended. This is a fresh tuna salad with green pepper, onion, and tomato seasoned with vinegar and olive oil on a slice of bread. Mucuma de atum is a main dish pf tuna fillets that are salt-cured with a leafy salad. Fresh seafood is abundant in this area and cataplana de marisco (seafood stew) and arroz de marisco (seafood rice) are local favorites throughout the Algarve. Polvo (octopus) is also plentiful in this area and it is served either cooked in risotto, grilled or deep-fried. There is also plenty of local fresh produce in the area.

* Praia da Ilha de Tavira — this is the closest beach to the town on a barrier island connected by a small channel to the community. You can take a ferry across to it, and enjoy the wide expanse of white sand as well as a good choice of restaurants.

* Water Sports — kite surfing is popular around here because of the deserted beaches, warm weather, and ideal wind speeds. Check out the Eolis school for training and products for water sports. SUP (stand-up paddle boarding) is another fun activity in the Ria Formosa lagoon with its natural beauty, calm waters, and ecology. Guided tours are available if you so desire.

* Tavira Camera Obscura — this is a water tower built in 1931 that was not used for a few decades before being transformed into a camera obscura inside the water tank. This is a darkened room with an image projected through a small hole onto a table or wall. In this case, exactly positioned mirrors project a live image of the town onto a table. While checking out what’s happening throughout the town you will learn about the technical aspects of this process.

* Núcleo Museológico Islâmico — this is a branch of the municipal museum and it opened in 2012. It is an exhibit of Moorish history in this area. Many artifacts are displayed here that were discovered during digs at Convento da Graça, Palácio da Galeria, and Pensão Netos. One of the main pieces is the Vaso de Tavira (vase) as well as a fragment of Islamic rammed-earth walls, an inkwell, and ablution sinks.

* Igreja de Santa Maria do Castelo — located on the previous site of the town’s mosque, this church was built in the thirteenth (13th) century shortly after the town was retaken from the Moors. This Gothic building crumbled during the 1755 earthquake but was rebuilt with a Baroque design preserving the Gothic portal from the 1300s.

* Waterfall Pego de Inferno — located about 4.3 miles (7 kilometers) from Tavira this waterfall was named ‘Hell’s Pool/Pit of Hell’ after a local legend. The legend is about a carriage falling into the pool and never being discovered. Formerly a hidden treasure of the locals, it is now a tourist spot that many visit. Many of the tourist facilities were burned to the ground in 2012 so that it has regained its offbeat presence. The waterfall and green lagoon are accessed by a wooden stairway and path from the parking area.

Where Is Tavira Portugal, and Why Visit? 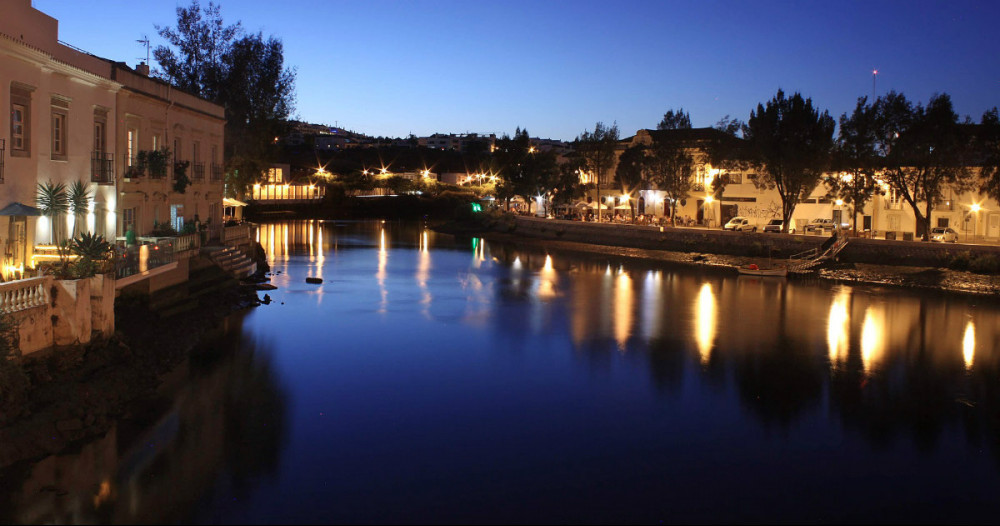 Considered one of the loveliest towns in the Algarve region of Portugal, you will discover that the weather and the food are fantastic. Many people choose this part of the world to retire because of its many beautiful beaches and golf courses. With its mix of Roman, Arabic, and Christian heritage, it has an interesting history and culture.

Since the town is so small it is easy to move about by walking. To explore the surrounding areas you will want to rent a car. There are a variety of options as far as accommodations are concerned. Here are a few choices for Hotels in the Area.

This out-of-the-way place is an ideal spot to relax and enjoy the small-town culture and there is a wealth of natural beauty to take in and appreciate. This just may be a destination to put on your list. In any event, it is good to know that this part of the world exists.

P.S. For those that desire to create a suitcase-type business doable anywhere in the world here is My #1 Recommendation. 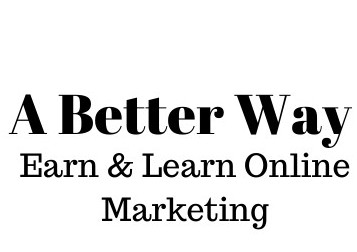 8 thoughts on “Where Is Tavira Portugal? A Wonderful Discovery”